Remember the days of Kool & the Gang in the 1970s? the slick outfits, the bell bottoms, oh and don’t forget the bracelets on the head, and the deep male voice bustin’ lyrics in spoken word (later called rap):

These were the glorious 1970s, the decade where children carried guns and blacks became beautiful.

It happened everywhere, that blacks discovered their beauty as the writings of Frantz Fanon made their way into the English language and the stirrings of Malcolm X and Steve Biko the decade before were now being understood.

Steve Biko explained it this way:

“Black consciousness is an attitude of mind and a way of life, the most positive call to emanate from the black world in a long time. Its essence is the realization by the black man of the need to rally together with his brothers around the cause of their oppression—the blackness of their skin—and to operate as a group to rid themselves of the shackles that bind their perpetual servitude. It is based on a self-examination which has ultimately let them to believe that by seeking to runaway from themselves and emulate the white man, they are insulting the intelligence of whoever created them black. The philosophy of Black Consciousness therefore expresses group pride and the determination for blacks to rise and attain the envisaged self. Freedom is the ability to define oneself with one’s possibilities held back not by the power of other people but only by one’s relationship to God and to natural surroundings.”

As we can see from Biko’s statement that a lot of the work was about recovery and self-affirmation. On the understanding that “If one is free at heart, no man made chains can bind one to servitude.”[1]

‘Black is beautiful,’ seemed to acquire a new meaning in the pursuit of liberation. It inspired a new confidence in the movement and psychology of the oppressed.

This is was not just a puppy-cuddling beauty, it was also fearful, as blacks discovered that the one thing they could do with ease was bring terror into the white world. Kool & the Gang’s lyrics “get down with the Jungle Boogie,” were playing with the white fear of the black person, by inviting the listener to dance with the Boogie they seem to be afraid of.

People remember that in towns like Randburg (near Johannesburg), gun shops were emptied after rumours about the riots in Soweto in June 1976. 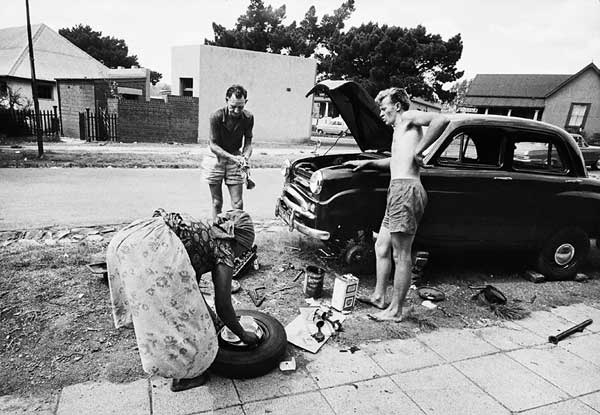 Afternoon tea being served to two men repairing a car on a pavement in Fairview, Johannesburg, David Goldblatt, 1965.

Meanwhile, writers like Sipho Sepamla, Miriam Tlali and Mafika Gwala were producing poetry and novels that told the stories of what was happening in the townships and homelands where blacks lived.

Dompas!
I looked back
Dompas!
I went through my pockets
Not there.

They bit into my flesh (handcuffs).

Came the kwela-kwela
We crawled in.
The young men sang.
In that dark moment

After democracy in 1994, we, as a nation, began a new struggle, quenched of the protest culture that helped us to get here. This became in a sense our arrival to a new home, emptied of the mentalities that inspired us in the past. From a long journey of violence and discrimination, we had to invent new strategies for coping with a fresh set of circumstances.

It had to be in its nature uncertain, precisely because it was new.

We were to linger in this uncertainty, to await new identities and terms that would help us to configure our united reality. The world has never lacked for brutal examples, certainly our former oppressor embodied the worst of these kind. But we could not use his examples to justify our own wrongdoings, for to do so would only numb our sense of horror in the face of our own crimes.

So as we walked into those Union Buildings that had housed stratagems for our death and torture, and called them home we also took along with them their cruel inheritance.

As we demanded for gates to be opened in formerly white schools and universities, their architecture, statues and traditions became our own.

But we also understood that this was our time, we would add our own embellishments to these traditions, and have buildings named after ‘our’ heroes.

For whites this looked scary at first, but slowly they began to lend a hand, and a sense that in welcoming blacks they were undoing the injustice of their previous generations. And indeed they were.

But they also started to understand transformation as them letting blacks in, and never the other way around. They understood blacks wanting to live in formerly white suburbs, but they scarcely showed interest in discovering townships.

Whites in South Africa (as do whites elsewhere)[2] have found it difficult not to see themselves as the solution to the problems we face. This has meant that integration is understood as the extent to which blacks are able to adopt white standards, i.e. economic conditions that put investors and rating agencies at ease; educated blacks speaking English with a white accent; the assumption that white suburbs are better than townships—but I have seen the aggression of roaring engines as people drive off at street intersections in white suburbs, and I am not convinced that this is the standard we should all want.

Whites have yet to show anything in real terms that would create in the black person respect for the standards of the white world.

Today, as we celebrate the first blacks: the first black chartered accountants, first black brain surgeons, and inventors, in the white eyes the mere celebration of these achievement validates their sense of value, that they are bringing something meaningful to blacks. But outside of these celebrations, there is little else in the white past that we should ever seek to emulate—neither Cecil Rhodes, nor Oom De la Rey.

Unless whites distinguish themselves from this history of achievement, there can be little that can be learnt going forward. Whites never want to place themselves at the crisis of the problem, and see it for what it is, they come to save, either by building churches or by giving out solutions.

Giving solutions allows white people to have something to say, but scarcely with any sense of responsibility. A responsibility to listen, and not have their fears sanctified. To understand that it is not all about them, and their International Investor counterparts.

To fear the ‘Jungle boogie’ has become a matter of habit, a mode of operating that hides something. As long as we can deal with the black person as something to be fled in crime situations, something to be given something (a job or spare change) we can avoid the confrontation: that we have to find out who she or he really is.

Today, black consciousness seems to have gotten its Kool back.

From recent student protests on statues at formerly English universities, to service delivery protest movements like Abahlali Basemjondolo (meaning: Shack Dwellers Movement), black consciousness has been making a guest appearance, as a way of voicing social and economic disappointment.[3]

Indeed, there is a racial intimidation underlying the revival of black consciousness speak, but it also reveals those white fears for what they are.

A lie! based on a deep-seated, long-held neglect.

The lie is entangled in culture, its symbols, its teachings: from the way children are taught at home and at school, to media that makes whites believe they are the centre of the world.

It is not that whites do not see this, but that they have been so used to playing by their own rules they are unable to envision an alternative.

Biko recognized this very early when he said,

We must learn to accept that no group, however benevolent, can ever hand power to the vanquished on a plate. We must accept that the limits of tyrants are prescribed by the endurance of those whom they oppress[4]

What Biko was suggesting is that no brotherly love on those who control power can ever make them treat you the way they want to be treated, only the fear of your power to retaliate would cause them to do that (or at least act like they’re trying to do that). This was the case at the University of Cape Town, with the Rhodes statue issue. It reminded us that human beings who are in a position to act on another’s behalf rarely do so except by the threat to retaliate.

Under its own terms, the University failed to yield to change. It was not the foresight of members of the University Senate, or goodwill of the Council that made them remove the statue. They would never have taken such decisive steps, such swift interpretations of heritage law and urgent unanimity of Council votes, were it not for the power to retaliate that the students seem to hold in that short moment.

Indeed I could have hoped that black consciousness had been able to ‘instil’ in the ‘demoralized’ black person a true and more authentic sense of its own worth. So that she or he does not have to wait for anyone to affirm their position.

But let’s be frank, the business of glorifying ones race and the need to reduce another is a recipe for disaster. Not only does it idealize race, as Europe has done for so long, but it has the tendency of overwhelming our present situation with the ideology of another time. In so doing it suppresses the present reality from ever being understood in its own terms.

It Wreaks havoc. But the absence of change makes it inevitable.

Whose afraid of the Jungle Boogie?

[3] Many of those involved in these movements are young people, who were not born yet when black consciousness electrified the hearts and minds of students and artists in the 1970s. To these recent protests, black consciousness has provided an interesting throwback on old ideas.

Previous Article: America Eats its Young: Riots and the Funk of Rage
Next Article No Longer Beautiful