Forgive Her Because She Cannot Stop Singing

It may help just for second to imagine a landscape where singing softly sung love songs were not possible. This was the moment when Princess Magogo Buthelezi lived, the life which she knew.

Mangosuthu Buthelezi describes her mother as a political force of her time—a musician and singer whose life story was turned into an opera. He continues to explain:

“In Zulu tradition when a woman gets married, on the second day we got what is called ubulanda [personal history]; where families exchange information about the bride. In the case of my mother, it was said that her problem was that she cannot stop singing. And because of the Zulu hlonipha [respect] custom, it was said they must forgive her because she cannot stop singing.”[1]
But few would understand the significance of the statement without knowing the shapings of Princess Magogo’s life.

Princess Constance Magogo Sibilile Mantithi Ngangezinye ka Dinizulu Buthelezi was born into royalty (in 1900). She was the daughter of King Dinuzulu (son of King Cetshwayo) and much loved by her father. As the clans of the Buthelezi and the Dinuzulu’s had been fighting for many years, Magogo and Mathole, the Buthelezi Prince were asked to marry. As was customary in the tradition, marriage between the two clans that had been in conflict was used as a symbol for unity. As they were now family, the assumption was that they simply could not fight ever again. Magogo’s life was thus suffused into this ‘peace treaty’ in 1926.

But did she agree to this transaction? To marry a stranger? We simply do not know. What we do know though, is that prior to her marriage the young Magogo had a lover. She was madly in love. The motif of love-lost would be the overriding mood of most of Magogo’s songs. A quote from her lullaby, Uyephi na?

Here we see Magogo’s song putting a baby to sleep. After a short ostinato introduction on her instrument, the singing begins with Magogo singing in her higher (falsetto) range. It begins with a question: To whom does the baby belong? a question that is repeated a number of times. We soon find out that the baby belongs to a certain man.

Suddenly the song shifts the focus from the baby, to its father. It asks where is the wife of this man? Of which the response is that ‘we do not know’. There is a sense of communal memory in the ‘we’. The casual progression from the ‘interior’ of the sleeping baby, to the ‘exterior’ suggestion in the line “Phuma mntanami ngibonise phandle” (get out, let me show you outside) establishes a community setting, for which the ‘we’ has been suggesting.

Up until this point the melodic movement of the song has been fairly consistent (if not predictable) to the listener. But when the song arrives at the line ‘Engasaqonywa nje uyephi na?’ (The man aint dating anyone so where’s the wife?)  it begins to sound dissonant as the vocal-line shifts to Magogo’s middle range.

By this time the lyrical content of the song no longer belongs to ‘the lullaby’. It has stepped into the realm of love, rumour and gossip. 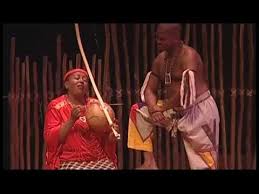 Sibongile Khumalo playing the role of Magogo in the opera. The instrument in her hands is called Ugubhu.

Ugubhu is a large, unbraced bow made of a gourd. Its sound is produced by the striking of the bow-string with a grass-stalk. The bow-string is traditionally made from animal gut or from horse-tail that is wound into a rope.

You have to understand the instrument Magogo plays, ugubhu, as an instrument that opens and closes on the chest. With a big gourd, that releases the sound of its frequencies in the face of its player.

“For the listener who has never experienced the sounds of the bow, I could explain it as the sense one gets when you put two mirrors face-to-face. At once you see the reflection of the one mirror in the other, and, at the same time, you see a recurring image of yourself in each of the mirrors. This results in an endless flow of images but all originating from the same source.”[2]

Its a very personal form of music-making, and Magogo typifies this in her characteristic descending melodic lines and her vocal treatment that starts each phrase musically and tapers-off in a declamatory, spoken-word fashion. These all give a pulling-back feel to every statement. It is like every line ends in the vibrating chest. Vibrating due to the gourd, but also vibrating due to the locus of that particular vocal-production inside the body.

Inside are emotions, hidden secrets which Magogo reveals at her will.

Stuck in a marriage of convenience, her’s was a life under constraint. A life lived to please authority,

In 1906, during the time of the Zulu Rebellion against Poll tax that was being imposed by the Natal white Government, Dinizulu (who was viewed as an instigator) was arrested. Magogo vividly remembered this moment, as she would relate how the British officers gave her a biscuit, as she watched her father being taken. Magogo grew up essentially as an orphan. Magogo describes her upbringing as unhappy, as she was taken away from home, soon after her father was arrested. She was brought up in the Buthelezi homestead.

This is important in understanding the character of ugubhu music. The way in which ugubhu is played performs aloneness. It is an instrument of a highly intimate quality, you sing to yourself essentially. And the sonic field that is produced by the resonater of the instrument creates the accompaniment.

Her songs are in a way not so different from the laments king David, in the bible, would sing while accompanying himself on the lyre. Magogo would have been familiar with David’s Hebrew songs, as she would later relate that she read through the bible from beginning to end, many times in her lifetime. Both are quite personal instruments, they are for a chamber setting rather than for a mass public performance. As the lyre is with merely 5-strings, ugubhu is also of merely 2-fundamentals, upon which the entire vocal texture extrapolated.

In fact if you look at the instances in which David is reported to have picked up his lyre and sung a song, it was at those times when he was experiencing psychological loneliness, a time of depression where he would plead to God for an answer to his doubts. These were at points where he was experiencing disappointment with his reality.

There is a way in which her musical expression replays this primal scene of loneliness. She responds to her own questions while she is singing. She enacts her own dramas.

It is under this scenario of the isolated singer that Magogo’s ugubhu songs take their form. Her instrument stands-in for the group of singers who are not there. In a sense, Magogo’s individual style of making music also refutes the belief that traditional Africans were always singing as one-big-happy-group.

In 2003, she was posthumously awarded the The Presidential Order of Ikhamanga in Gold for her “a life of prolific musical composition, and outstanding contribution to the preservation of traditional music in South Africa”. And later she was awarded a Lifetime Achievement SAMA (South African Music Award).